Saved by a Beard and a Towel

True Stories from a Lifetime Freelancer:

The Client Who Thought He was a Brain Surgeon-- 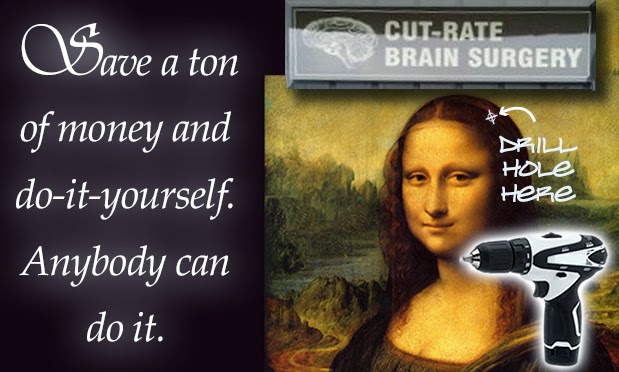 My story begins in the distant past. I was doing graphic design for many industrial clients then and  one client made components for radio broadcasting booths. Their niche and sales pitch was that their components were smaller than the competition’s and therefore took up less space – important in the cramped space of a broadcasting booth. I needed to be an expert on how to market, through their trade ads and catalog, this concept in a compelling visual way. Although I’m a trained artist and love to make beautiful things, the successful freelancer has to solve his/her client’s needs and expectations first and one’s ego second. I actually enjoyed all the widget companies I worked with, many extremely interesting and unique, then I moved on to hospitals and banks, and now I do book design. Making something that I was proud of and that solved the problem was and is always the goal.

How I got involved with this prospect

I had done a direct mail campaign to come to the attention of this client so we didn’t know each other. I generally dealt with the marketing director (my contact) and this was no exception. His name was John and I really liked him right away. He had been a broadcaster and had a velvet voice. Getting a payment plan pitched in the early stages is always a good idea, usually one-third down, one-third on completion, and the final payment within 30 days. (But it’s never 30 days, more like 60 days—keep that in mind). Anyway as usual I never gave cost figures in the initial meeting off the top of my head (they all want that). I came back from my freelance lair after studying how much time this project would probably take me, and settled the payments with John, who had to get approval from his boss Ed. I met Ed, and I didn’t care much for his manner, but I didn’t need to work with him, so I just made a note about watching out for Ed, the money man.

Smooth going for a while

The work went well and I was asked to do more work continuing to work with John, but Ed made many side remarks, like: “you’re robbing us blind but we’ll pay you.” “This ad better pull well for us,” and an occasional remark Telling me that Ed knew nothing of what things really cost, just what he thought they should cost. This is VERY typical of clients. They get an arbitrary idea of what something should cost based on what they think (normally without any basis in fact) and then judge your billing against it. The life of a freelancer!

After a few very successful campaigns with John, John decided to move on to another job. (This also happens all the time to freelancers and you then have to re-establish a relationship with the new replacement.) But in this case they didn’t replace John. I got stuck dealing with Ed and Ed took great delight in showing me who was boss. We met, and he outlined the next project. He immediately wanted to know how much it would cost. It was similar to other projects I had done with John so I knew the price, and I told him. “You thief,” Ed said to me. “That’s not you charged John!” It was exactly what I charged John, so he was way out of line and this relationship was going south fast. I told him “That’s exactly what I charged John,” and Ed said , “You’re a liar.” Well, lines do get crossed, and I picked up my bag and bid him and his company farewell. Extreme, but in this case necessary. There’s no reason to get into an abusive relationship.

Saved by a Beard and a Towel

Many months later, I decided to grow a beard and join a gym. I was going into the steam room and who should be there but my ex-client Ed. Due to the steam, beard and my being dressed only in a towel, Ed did not recognize me. I heard him say “…He robbed me blind!” But he wasn’t looking my way, and the conversation continued “…He only drilled a hole in my wife’s head, didn’t take him more than a half an hour, and he charged me $10,000.”  His wife obviously had had brain surgery. Ed’s last comment was “…I could have done it myself with my drill.”

The lesson in this tale is that your point person is not the company who employ you. Better to review who his boss is and cultivate a relationship with more than one person. Your freedom is one very good reason to be a freelancer in the first place. Remember you are also a marketer and you can work hard at finding and keeping clients that respect you as a peer and not as your boss. I didn’t need a hole in my head to figure that out.

Art in Words
Joe Tantillo has had over 30+ years of award winning graphic design experience with lots of tales from his journey. His client base has been very diverse, from fortune 500 clients, software companies and hospitals to small companies. For the last six years he has specializing in book and cover design for print-on-demand and epublishing books www.tantillobookdesign.com He also devotes his time to fine art photography www.tantillofineart.com